Intern at a Startup as My First Job 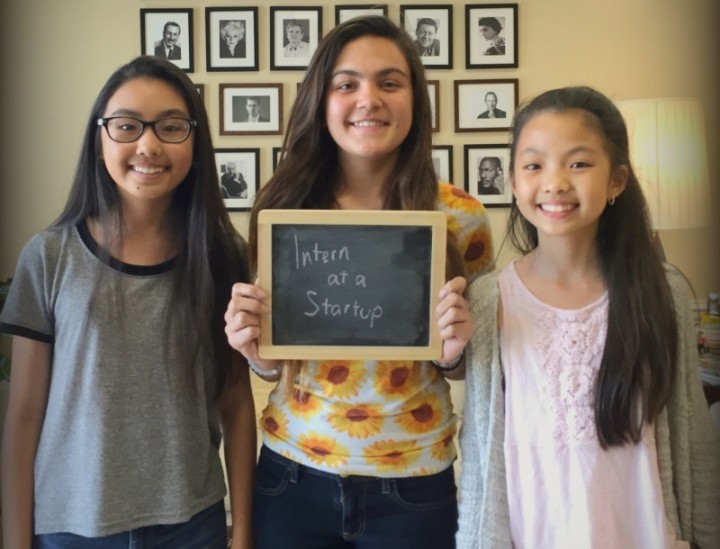 All new jobs, if they’re really new, come with some degree of intrigue. However, there’s something about that first job that always makes them feel momentous, like you’ve conquered something major. And you have done just that–no matter how modest the job may seem.

Whether it’s been years since your first job, or merely a few weeks (like our new interns, Michelle and Lydia), we know you never forget that feeling of magnanimity (once, of course, you get over the fact that this means less time for video games).

In fact, here below is a couple of literally fresh perspectives. The first from our brand new 12-year-old intern, Michelle:

“The morning of June 10th started something like this:

‘Michelle, don’t be nervous! You’ll do fine. If your sister can do it, you can do it.’ That’s what my parents always said. How can I be fine if I don’t even know what my skill is? Am I even qualified to become one of these sophisticated people?

Walking into COWORK by Office Divvy, the space quickly comforted me. I was politely greeted by the front desk team. I also saw another new intern, Lydia, which was a real relief! I wasn’t alone after all! Then, music filled my ears. I almost started dancing, but I quickly jerked my body to make the movements stop. Michelle, be professional! 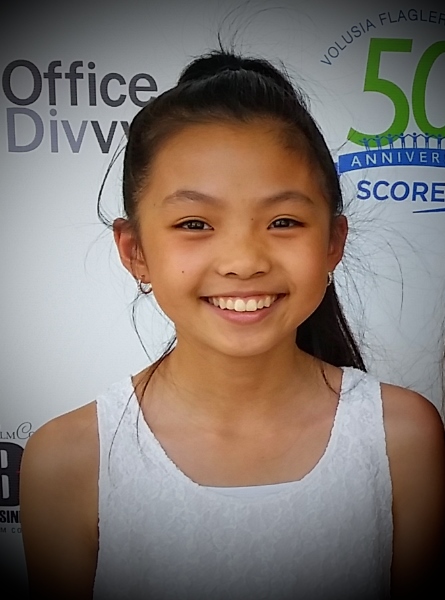 Then I saw the beautiful rich red couches with their soft, multicolored cushions. I tried with all my strength not to give in and just fall right into them, and thankfully succeeded. Instead, trying to be as professional as possible, I sat down, and elegantly (at least that’s what I thought) crossed my legs.

Now was the waiting game. Ok fine, maybe I was exaggerating just a little bit, but let’s just say I was anxious. What if I have no skills? At all? After having this conversation over and over again with myself, Ky and Lisa, two out of the three of Office Divvy founders, finally arrived.

And she went on. It was a lot to take in, but it was riveting, and I was so focused on whether I would make it or not, some of it went in one ear and out the other. After the talk was over, Ky asked Lydia and I a very important question.

‘So are you committed?’

I nodded my head so many times in such a short period of time my neck practically dislocated. By the time it started to feel better, Ky had already created each of us our own Office Divvy email account. Now it really felt legit. A 12-year-old working? How strange. And that was the moment I became an intern at a startup.”

And there you have it, Michelle’s experience landing her first job. Now allow me to share my side of the story:

At 17, I may be a little more seasoned than Michelle, but my first job was the same, an intern at a startup, too. Likewise, the startup was Office Divvy, if you haven’t guessed. It all started when I needed to find a story for my journalism class. My friend, who was in the same class as me, told me there’s a place called Office Divvy, and they’re looking for interns. “If you wanted to,” he told me, “you could write a story for ’em.”

The name, Office Divvy, sounded vaguely familiar – and I later realized that it was because my mother had mentioned the company a few months prior.

“Kedron, you should check them out. They seem like they’d be really cool,” she said. Like a typical teenager, I responded apathetically. The conversation ended there.

But I accepted the offer to write the story, and went into their office to interview the co-founder and some of the interns. I learned so much about how their business worked, and what they do, and–most importantly–what they’re looking for.

“We’re looking for curious students, ones with common sense and an interest in the business and online world,” Ky said. 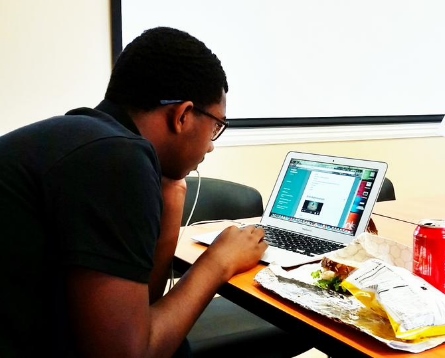 That’s me! I’m curious! I have common sense! I’m interested in the business and online world! None of these things I said, of course. I too had to keep my cool. I didn’t want to sound desperate. I mean, I know that I’m professional!

I wasn’t here to get a first job afterall.

No! I was here to get an interview, and do a story. Nothing more. But, if they’re looking for interns just so happen to thoroughly describe me…Well, I might be interested (Afterall, it is right across the street from my school, and I can’t drive yet, not to mention the whole interest thing).

Honestly though, how else was I supposed to get an awesome internship?

This was way more convenient than going online later and essentially knocking from door to door. What else could they do? Wrap it up for me?

That night I went home. “MOM, MOM, guess what!” She turned her face away from her book.

When I was done, she said,

“Wow, that’s great!”  in the most sarcastic tone ever. “If only I had that knowledge to pass onto you earlier, because y’know what: it seemed like it would be a real good fit for you. Man, your friends sure do know you well!”

“I know, right!” I said in all seriousness.

Fast Forward: I’m glad my first job happened to be as an intern at a start-up.

This entire self reflection on how we got our internships for our first jobs was because of an experiment we did at the last entrepreneur night. 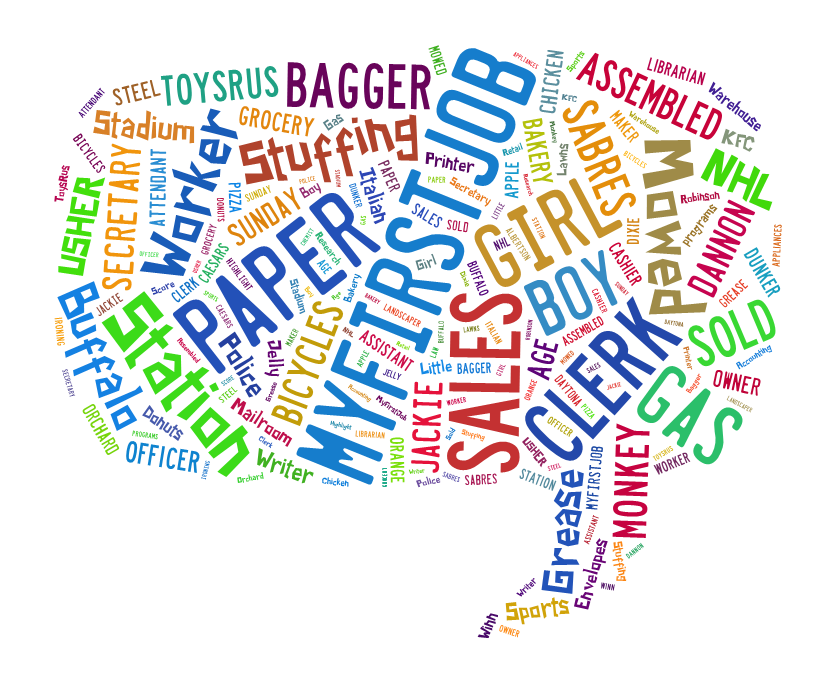 May’s Entrepreneur Night ran with this auspicious life event as a theme. First job was the hot topic at the event last month. After dropping their business card in the bucket and acquiring their name tag, entrepreneurs and general business folks were led to the step and repeat Entrepreneur Night banner, where they were handed a small chalkboard. They were then asked this question: “What was your first job?”

Participants wrote the answer down and held it proudly over their hearts as the camera flashed.

Whether their pride was warranted from the memories or from the fact that those days were long gone, all wore large smiles. Good vibes all around.

What you’re looking at above is a word cloud generated from the answers participants gave for what their first jobs were. And below, you’ll see some of the faces that go along with their answers.

In case you were wondering, here’s a quantifiable breakdown of what we found after talking with attendees at the event: 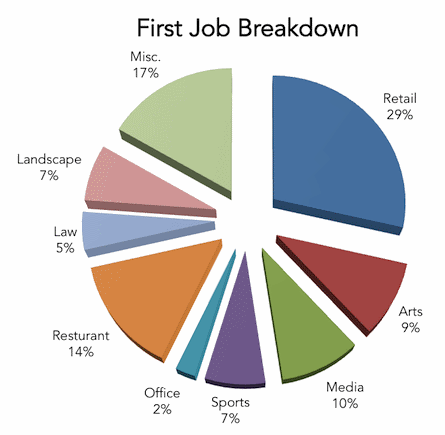 It’s almost funny to think about the challenges we faced in those first job days.

How insurmountable the world seemed.

There’s a story behind every single one of those chalkboards where these professionals, entrepreneurs, and small business owners held their first jobs.

Whether they were hooked up by a friend, were self-motivated enough to apply, or spent a year’s worth of blood, sweat, and tears to secure a position.