How to Build A Local Startup Community in Flagler County 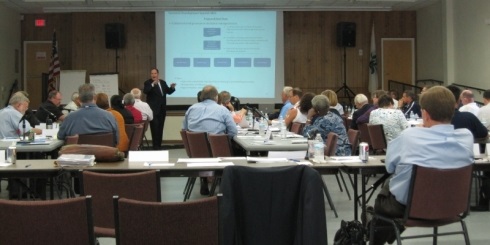 The “Flagler County Economic Development Summit” concluded on May 13, 2011. A document compiled by the 5 focus groups was presented on the final meeting.

The five focus groups were:

Here is the Flagler County Economic Development Summit Presentation as presented on May 13th; which is a compilation of individual focus group suggestions:

I took the liberty to preserve this document from the Summit by uploading it to Slide Share as this was an exemplary effort in Flagler County bringing business owners, government officials, economic development folk together.

You may notice however that the ideas presented are not perfectly harmonious.

In that sense, it perhaps is a good beginning than a final product, i.e. a clear road map to success. But it’s important to celebrate the effort, and it did take serious effort.

I was involved in the first group to work on “Creating a Robust Entrepreneurial Environment and Organic Growth.”

I’m sorry to say that we perhaps missed an opportunity in the focus group I was a member of, to truly champion ideas involving Promoting Entrepreneurship and Encouraging a Startup Culture as a part of this group’s suggestions.

Instead a different route was chosen as a collective, which you may have seen in the above presentation.

Now, going back to the idea of How to Build A Startup Community…

Just as the “Economic Development Summit” was concluding in Bunnell on that Friday the 13th, Mashable (the powerful technology-and-web-news portal), published an interesting article titled: How to Build A Local Startup Community by Travis Oberlander.

1. Don’t Try to be Silicon Valley:
This tip makes a point to embrace the uniqueness of one’s city or community. Don’t try to be some other community you are not. Instead, focus on what your region is known for and involve the leaders of those industries in the Startup ecosystem.

2. Work Openly
This tip is all about the Coworking phenomenon, which is a tremendous trend in the world of Web and Technology Startups as well as Entrepreneur and Creative/Technical Professionals circles. If done right, Coworking spaces become Incubators and Startup Accelarators for new businesses and help drive job growth in the area. At Office Divvy, we have been among the first dozen Coworking spaces/communities in the United States, and offering Coworking and holding free “Coworking Jellies” since 2008, which was the breeding ground to many entrepreneurial connections.

3. Get Creative With Regular Events
In the Palm Coast and Flagler County landscape Mixers and After-Hours parties are plenty. They are familiar concepts, easy to host, and easy to attend. However they become monotonous as easily, and are not always the best environment for building relationships. Meetups, tweetups, coworking jellies, startup weekends and any event that thinks outside of the box are more attractive for the startup community.  { note: see update below }

4. Find a Local Evangelist
Instead of (okay maybe it’s more appropriate to say in addition to) tooting the horn of government organizations and public-private partnerships, recognizing the local entrepreneurs who are dedicated to spreading the word about our community. Embrace what they’re trying to do and support their efforts. These people will attract fresh talent and reach out to leaders elsewhere to promote your engaged and thriving community. Influential bloggers, and strong local twitter users/influencers also fall into this category.

5. Pay it Forward
Realize that as a community we are all in this together. Openly support new entrepreneurs or startups in need of help, and that includes my original idea which I proposed to the focus group: A Pledge to Entrepreneurs and Startups* by the Flagler County and the Cities in this county. Also support and celebrate the successes of others while embracing failures. Because failures breed success. Sometimes all it takes is one success to raise the tide for others.  { note: see update below }

” There’s never been a better time to foster a local startup community. With the right ingredients of dedication, collaboration evangelism and support, you’ll set your startup ecosystem on a path for continuing success for decades to come.”

I wholeheartedly believe in what Travis says…

AND ONE MORE RECENT UPDATE:

I'm a Co-Founder and Managing Partner of Office Divvy. I am an entrepreneur, a trusted advisor, a world traveler, a Coworking advocate, and an appreciator of fine cigars.